Over each cycle of tidal flow, the level differences between Bass Strait tides and the delayed (and smaller) tides in the large "main body" of the Bay create both long duration "downhill slopes", and shorter duration "uphill slopes" in the sea surface across the connection between these two large water bodies. A surface slope is called "forward" if the height decreases in the direction of the tidal current, and "reverse" if the height increases in the direction of the current.

The diagram below shows the predicted tide curves and surface slopes along a 5 point transect from outside in Bass Strait through to Melbourne for parts of the Low --> High --> Low tide cycle on 29/05/2021. The Low --> High "outside" tidal range of 2.47m is one of the largest for the year. 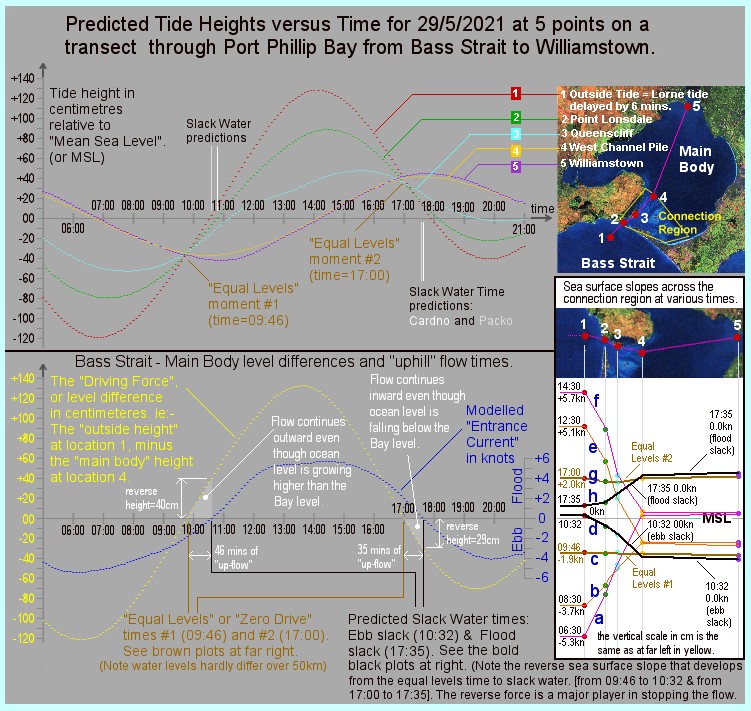 It is a complicated picture of several parts:-

1) The top panel shows the tide heights over time for the 5 locations shown on the map at far right.

2) The lower panel shows the level difference between the "outside" and "main body" tides over time. This provides the "driving force" for the entrance currents. The light grey triangles just before slack water show the unusually long "up-hill" flow times at Port Phillip Heads.

3) The far right panel (white background), shows how the level difference changes with distance at eight selected times. These profiles are best examined in chronological order ( a -> h) starting at 6:30am with a strongly ebbing tide. The two slack water profiles (in black) show the "reverse height difference" that is needed to finally halt and reverse the tidal flow.

During the "up-slope flow times" the reverse height difference between the Bay's very large "main body" zone and the ocean can grow to as much as 30-45 cm by the time slack water occurs. This difference is spread across about 15 km from just outside Rip Bank to the northern edge of The Great Sands, so the "slack water slope" isn't visible to the naked eye.

It is however clearly evident when comparing the "outside" and "inside" tide curves once these are adjusted to a common datum level like MSL (Mean Sea Level) or AHD (Australian Height Datum).

The reverse height difference between the ends of "the connection region" approaching slack water produces a high rate of slowing down before slack water and a high rate of speeding up once the stream reverses. The commonly held belief that slack water at the Heads is a time of no height difference and no forces in play is totally false. Water speeds are in fact changing here at a faster rate than at any other point in the tide cycle. Boaters near the Heads need to appreciate that while the flow momentarily stops at slack water, their vessels are actually floating on a sloped water surface.

Compared to craft floating in the "main body" region, the absolute water line level of a craft at the Heads may already be around 30 cm higher (slack after ebb), or 30 cm lower (slack after flood), with that difference growing strongly. There are strong sideways forces acting on the water under the vessel at that time to accelerate it in the new direction.

These forces exist because at slack water a significant level difference exists between Bass Strait waters just outside the Heads and the "main body" of the Bay north of the Great Sands. When strong tidal streams are halted, the average upwards sea surface slope across the 15 km long "connection region" is in the order of 3cm per kilometre. Nearer the Heads it may run to nearly double at say 5cm per kilometre. This translates into a horizontal underwater pressure differential between two separated points in the same horizontal plane.

The diagram below shows a one kilometre long thin "pencil" of submerged water laying horizontally through Port Phillip Heads at slack water time after a strong flood tide has finished running in. The "pencil" has a square cross-section of 1m x 1m. 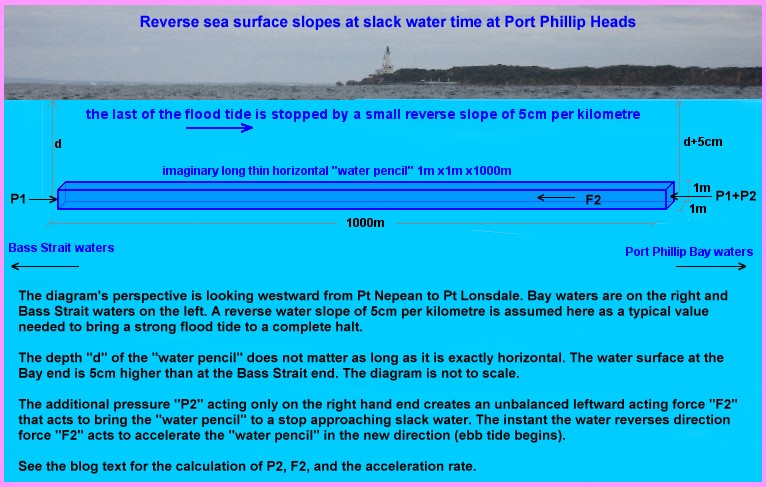 The diagram's perspective is looking westward from Pt Nepean to Pt Lonsdale. Bay waters are on the right and Bass Strait waters on the left. A reverse water slope of 5cm per kilometre is assumed here as a typical value needed to bring a strong flood tide to a complete halt. The depth "d" of the "water pencil" does not matter as long as it is exactly horizontal. The water surface at the Bay end is 5cm higher than at the Bass Strait end. The diagram is not to scale.

The absolute water pressure (or force per unit area) at any depth is due to gravity acting on the mass of both the air and the water above that point. The weight of the air alone gives us a base pressure of "one atmosphere" at the sea surface. Although this may vary a little over time with changing weather, it will be pretty much the same for all locations within 10km of each other. Most divers will know that dipping below the surface, the water pressure "P1" increases by an additional amount of roughly one atmosphere for every 10m of water depth.

There is an additional pressure component "P2" due to the water column at the right end of the "water pencil" being 5cm higher. This extra height holds an additional mass of water, which for each square metre of sea surface will be:- 1020 x 1 x 1 x 0.05 = 51 Kg per square metre.

Water pressure acts in all directions, including on the 1m2 area of the right hand end of the "pencil", and the 1m2 lefthand end of the "pencil". However the extra pressure "P2" (= 500 N/m2) acts only on the righthand end and so produces a net leftward acting force "F2" of 500 N on the "water pencil". It is this unbalanced force that initially "pushes against the pencil" to decelerate the inflow, and then after slack water is achieved keeps "pushing the pencil" to accelerate it outwards into Bass Strait.

Roughly speaking 500 Newton is about as big a force as a human could exert (on land) in trying to shove something heavy in a sideways direction. It is a little like a man trying to to push a broken down car on a smooth level road. However in this case the "car" is rather massive at 1,020,000 Kg. On land, any such endeavour will fail due to "static friction". This is the minimum amount of force needed to generate any movement at all when solid surfaces slide over one another.

However in water there is no static friction and also since the water is almost stationary, very little frictional drag force over the seabed. Even a small applied force can start a large mass moving but the acceleration rate will be very low. A rearrangement of Newton's Law to: [ a = F / m ] allows that small acceleration rate to be calculated.

Plugging in the previously calculated leftward force (500 N) and dividing this by the mass of our one kilometre long (and 1,020,000 Kg) "water pencil" will give the pencil's leftward acceleration rate due to a 5cm/km sea surface slope as:-

Note that the waters at Port Phillip Heads can be considered as being made up of a large bundle of thousands of such horizontal "water pencils", with each one having a 500 Newton unbalanced force pushing it to the left and out into Bass Strait.

The whole of the waters at the Heads will therefore be accelerating out into Bass Strait at a rate of around 0.00049 m/s/s. Note this example is for forces that exist after a strong flood tide has been stopped. Weaker tidal flows require smaller reverse level differences to stop them, lower "F2" force levels, and so will have lower deceleration and acceleration rates around slack water time.

Expressed in the usual scientific m/s/s units, the water's speed will be accelerating sideways at 0.00049 m/s/s. This is a small number because measuring the change in speed of a very large water body over such a short time interval of one second yields this small value. It is difficult to comprehend in a practical sense. For mariners and boating folk expressing the speed change over a longer, more sensible period of say 10 minutes, and using more everyday speed units can give us these results:-

The "Packo Prediction" method for deriving both slack water times and current reversal rates at the Heads uses a totally different procedure involving tidal curves and surface areas to estimate volume flow rates through the entrance. However for slack waters where there is a large ocean tidal range, those calculations give reversal rates of around 0.5 to 0.6 knots per 10 minutes. This is in good agreement with the result calculated above.

That number range is also consistent with the reversal rates calculated from the 20 minute predicted current speeds published in the Australian National Tide Tables. It is also in line with typical "diver experiences" at the Heads, where after strong tidal flow a slack water dive might last for only 20 minutes. During that time we might estimate the current changes from roughly 0.5 knots in one direction to 0.5 knots in the opposite direction. This example gives an average speed change rate of 0.5 knots per 10mins.

The "Little White Lie" pushed by virtually all government sources that claims there is no, or very little level difference at slack water, is at once seen as both incorrect and rather silly. The very large mass of water involved can't be slowed down and then reversed out through the Heads at these typical reversal rates without a large force being present.

In very rough terms the cross-section at the Heads is around 36,000 m2, so our "bundle of water pencils" will be around 36,000 in number. Each will have an unbalanced 500 Newton leftward force giving a total leftward force of around 18,000,000 Newton for just that 1 km long stretch of water.

Those who support the "official line" are unable to explain how this necessary level of force is generated. With water friction dropping to zero at slack water, the only possible source of this force is a reverse slope in the water surface due to a significant reverse level difference between Bass Strait and the Bay's large "main body".

The previous calculations show a reverse water slope of 5 cm/km is needed near the Heads decreasing to around 1cm/km over the Great Sands roughly 15 km away. Taking an average reverse slope of 3 cm/km over this distance gives us a reverse height difference at slack water of 45 cm. This is also in fair agreement with the slack water height difference observed in the tide gauge records of a strong tide being brought to a halt.

To create this difference a tidal stream needs to flow uphill for roughly 40 - 80 minutes beyond the "equal levels" time. This is perfectly possible because at the "equal levels" point the tidal streams still have 1 - 2 knots of speed that can be slowly sacrificed so the current can push into the slightly higher pressure (and higher level) region.

All these "back of the envelope" calculations of the "equal levels time", the stream "reversal rates", and "reverse height differences", are in fair agreement with direct observations of the tidal heights and stream speeds. It is the ONLY view of "Port Phillip Heads Tides and Streams" that holds any water!

Unfortunately so many folk have been led down the Alice In Wonderland Rabbit Hole of "Equal Water Levels and Slack Water Happen Together" that this idea has developed an enormous momentum of its own. This seems to cloud common sense and reasoning, and also flies in the face of the laws of physics.

I am just trying to play a part in unwinding that mess through this series of blogs. Hopefully as time goes by, more and more folk will climb aboard this better train of thought. There may be some small, but possibly important, safety benefits in doing so.