5km lock-down (again) in July! Freezing wind rattling the windows and rain pattering on the roof. What on earth can scuba divers do in these circumstances? Well browsing the Scuba Doctor's dive site webpages is one way to feel "wet" again while staying perfectly warm and dry.

I've directed my attention to a few alternative GPS "Mystery Marks" that Lloyd sometimes lists alongside the "Accepted Mark" for some dive sites. He has asked for help from anyone who may have visited and "sounded out" those "Mystery Marks" sites. I think some of these can be resolved in other ways:-

She's an ex Navy Patrol Boat scuttled in Bass Strait in 1999. The story goes that she was supposed to be put down in around 30m of water as a recreational dive site but at the last moment the Navy went for deep 80m water around 30nm south of Pt Lonsdale. Unfortunately this took it way out of both the depth and distance range of all but the most serious wreck fanatics.

This is a reasonable second source confirmation of the "Accepted Mark".

This post is concentrating on the alternative "Mystery Mark" that Lloyd has also listed. This "#2" mark is:

We have a GPS Mark for the Bayonet other than the one we're using.

It would be interesting for someone to check it out and report back to us what, if anything, is there.
Well it is so far offshore I don't think anyone will actually be willing to go any extra distance to sound out this mark. I don't think they have to, as the mystery is 99.9% resolved with far less effort.

The key here is to note the large distance of 821m between the two marks is entirely North-South. So rather than them being two widely spaced marks, it is far more probable they are copies of essentially the same mark, but with a latitude stuff-up in one of them (#2).

If we assume the "Mystery Mark" was originally given in the degrees, minutes and seconds format, then the Latitude seconds value of 29.58" could be a bad transcription of 2.958" (ie. the decimal point "slipped" one place). If this is correct, the "Mystery Mark" Latitude in degrees and decimal minutes would then become: 38 43.049' S. The "Accepted" and the "new Mystery" positions are then only around 2m apart and the mystery disappears.

Perhaps the moral of the story is that if you do use seconds, then it might be worthwhile always writing down two digits before the decimal point even if the first is zero. (ie. 02.95" less likely to be accidentally transcribed later as 29.5")

It is common for high grade bathymetric surveys to record the "seconds" value to 2 decimal places as this roughly matches the horizontal accuracy of the differential GPS often used in these surveys.

It is still possible that the "Accepted Mark" is just a "rounded up seconds" version of the corrected "Mystery Mark" from Dive Victoria. So the two positions can't be regarded as independent and one doesn't confirm the other. However, the eChart mark is so close to both of these two, that it sort of confirms them and probably the "latitude stuff-up" theory as well.

Early Bass Strait shipping rounding Wilsons Promontory would pass through the Anser Group of Islands and in particular between Anser and Kanowna Islands. This was thought to be a safe and deep water passage of about 50m in depth and around 1km in width. Some distance northwest of Kanowna Island there is an area of lesser depths but mostly still 20m or more.

What was not known at that time was that a small "nipple", just 40m in extent, protrudes further upwards to a minimum depth of just 5m. There must have been lots of unnoticed "near misses" in this much used channel over the early years.

On the morning of 15/09/1885 that luck ran out! The steamer S. S. Gulf of Carpentaria travelling westward at full speed "discovered" that rock peak. It tore the bottom out of parts of the ship and gave birth to the previously uncharted rock from then on being known as "Carpentaria Rock".

It appears she washed off the rock some time later and went down head first in deeper water nearby. Today's shipping channel around the Prom skirts around well south of the all the Anser Group of Islands and has separated eastbound and westbound lanes for added safety.

The wreck is known to be in nearly 50m of water on a largely flat sandy seabed. Where is she? Well the Scuba Doc gives both an "Accepted Mark" plus a "Mystery Mark" from Dive Victoria about 0.5km further away. These are:-

The "Accepted Mark" is:-

This time I am leaning towards the second mark. I've viewed the Beckhurst video a number of times and it looks a great dive. There is no explicit note that the first mark actually came from that group of divers. The evidence I see against the first and third marks comes mainly from marine chart positions. While I wouldn't normally put too much weight on this, it does seem to be supported by some detailed bathymetry I have been looking at recently.

What do we know for sure?

a) Some/many divers do know the accurate position and we just hope one of them might post here to clarify things.

Using b) as a local reference point, the distance and bearing to the three marks are:-

So they are spread in three totally different directions away from the rock itself. As far as the distances are concerned all are probably reasonable. Statements from the Captain (in various Trove hits) say she was stuck on the rock for some time with rapidly rising water in the holds. They took to the boats fairly smartly but stayed close by until she started to roll about. It seems she loosened her grip on the rocks at some stage and drifted off to sink nearby in what was claimed to be "30 fathoms" (55m).

From hitting the rock to the final plunge took around 3 hours. No lives were lost. The cargo was principally bales of wool bound for London. While the air trapped within the wool bales might have initially given them some buoyancy, once the final plunge started it would be unstoppable.

1) Chart depths and bathymetry show that at the "Getunder Mark" I have, the depth is only around 30m and not the 45-50m mentioned in the Beckhurst video. It also appears to be on a rocky incline and not on a "flat sandy bottom". Probably the numbers got wrongly transcribed somewhere along the line.

2) The "Accepted Mark" does appear to be on a flat sandy bottom of about the right depth. However it is rather too flat. I see no ups and downs of 1m or 2m in the bathymetry that might indicate low profile wreckage. In addition the "sandy area" is not that large. It would seem difficult to "park" an 88m long ship here without one end or the other coming close to the nearby rock walls that rise up from 46m to 30m. These should be visible from some parts of the wreck. Nothing of this sort is visible in the video, nor is it mentioned in any "Carpentaria folklore" that I have heard or read.

3) In contrast the "Mystery Mark" has a lot going for it:-

a) The depth is right.

b) It has a large area of flat sandy bottom.

d) It is the only site East of Carpentaria Rock's high point. This is in agreement with the Prom Marine National Park Map which mentions the wreck and roughly indicates its position. (see below)

e) The detailed bathymetry I have seen shows a patch of soundings 0.5m - 2.2m above the surrounding seabed in this area.

g) At high zoom level, the eChart attempts to show the outline of a debris field. While I have never seen this eChart feature before, the outline's size, shape, and orientation matches the bathymetry indications pretty closely.

Hopefully Lloyd might recheck the provenance of the "Accepted Mark" to see if it was communicated properly to him. Hopefully this might bring something to light. If not then might I suggest a first sounder search close to, but a little SSE, of the Mystery Mark. According to the bathymetry, the biggest level difference between the sandy flat and the "alleged wreckage" is around 2.2m which should show on the sounder. That point's coordinates are: 39 08.666's, 146 17.983'e. This is also within just a few metres of the eChart wreck marker.

Hopefully someone who has actually been there and knows how to take a good GPS mark in deep water might come forward to confirm or deny any of my musings above.

The image below is taken from the Prom Marine National Park booklet. I've added the red bits in roughly the right positions to help visualise the situation as I understand it:- 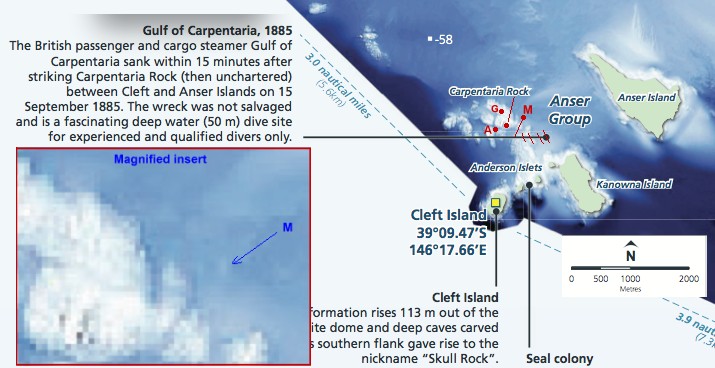 No not really. Sadly the bathymetry data I use to make false colour images of sea floor depths stops way short of all the graveyard wrecks. Even the J4 Sub is in a "no-data" zone.

I can't remember which end is the bow, but the wreck alignment is about 60T (ENE) [or 240T (WSW) going the other way.] I hope this may be of assistance to any first timers heading down to dive her. I've done it both from Flinders and from Newhaven (PI) in a fairly small dive boat. The distances are similar at around 22km one-way, but the more weather exposed route from Flinders requires careful consideration if there is any chance of a west or southwesterly springing up for the homeward run.