Recently I've started to add 'Finding the' information to dive sites for which I have multiple GPS marks. Thus the various marks and sources are published in one location, rather than me just picking one mark and no-one understanding its relationship to the other ones out there. Where possible, I've included GPS Plotting Sheets from Packo to help clarify things.

The Lady Cheryl includes one of Packo's GPS plotting sheets.

I've now started to enhanced these "Finding the" information blocks to include the distance and bearing the extra GPS marks are from the GPS marks we're using for the dive site. It really helps to better understand the relationship between the marks.

With regard to recent updates to the Hurricane dive site page, I make these comments:-

The link to the "Dive Site Information Sheet" pdf file, and its wreck site sketch that initially displayed on the SDoc site:-

is a mixed blessing, with both some very good information and some less than helpful stuff.

These pdfs were generated over 40 years ago and never got revised. Perhaps that is why Heritage Victoria seems to have withdrawn them from their website.

My early dives on the Hurricane were a little confused when I tried to tie the wreck layout I was seeing to the sketch. The direction of the tidal streams over the wreck weren't what I was expecting. It made navigation a bit awkward.

Eventually it was sorted out by carefully anchoring at one end of the wreck on an accurate GPS mark and then swimming a weighted marker buoy to the other other end of the wreck and sending it to the surface for later GPS measurement. The line between the two positions gave me a good alignment of the long axis of the wreck. It was not east-west (270 T) as the sketch suggests but around 338 degrees True (NNW).

The second problem was that I found two concrete pyramid shaped marker plinths not just one as in the sketch. Furthermore neither plinth seemed to correspond to the one in the sketch. This was puzzling, after all a 500Kg plus concrete block on the seabed can't just get up and walk around! Or can it?

The solution revealed itself after discussion with Peter Harvey of MAV. It seems some time after the original survey and sketch was done, a scallop dredger ran over the site and dragged the plinth right across the wreck. The plinth and its information plaque were damaged (plus some other damage to the wreck). Some time later a second plinth and plaque were laid, this time at the other end of the wreck and just off the starboard bow.

Those wishing to better link what they are seeing and the MAV sketch might like to look at a "packo corrected" version at this link:
Corrected Hurricane Info Sheet

Early efforts by many groups to dive the Hurricane were hampered by a bad GPS mark in circulation. ScubaDoc's website has had a pretty good mark for at least the last 10 years, but recently Lloyd has added a bunch of other slightly different marks just to cover all the bases. Normally I would recommend having a plot of all mark positions over a surveyed wreck outline to help sort out which mark is where.

While I don't have access to a surveyed outline, I was lucky enough some years back to grab an aerial photo taken off Rosebud when the sea surface was silky smooth and without any sun-glint problems. Although water vis is never great at this site, with a bit of tweaking of the photo, the darker seabed wreckage against the surrounding sand can be made out (just!). Furthermore the photo was from a Vic government site that allowed geo-referencing.

From this photo I cobbled together the image below to show how the just visible wreck sits within a WGS84 grid. The white dots are the current collection of the Scuba Doctors "Hurricane Marks": 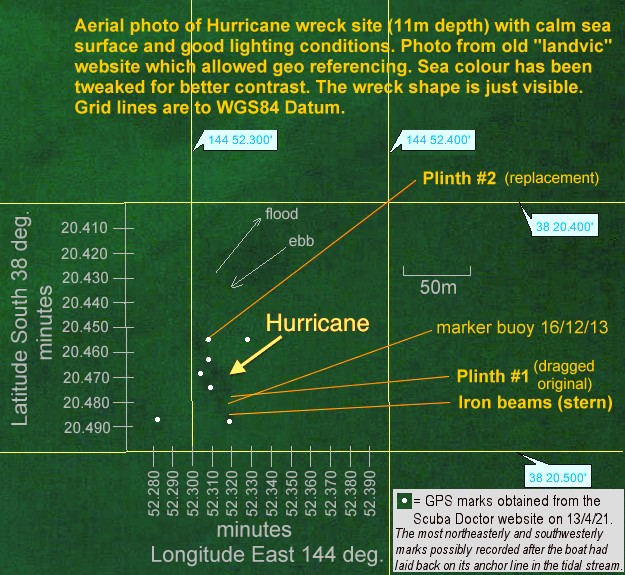 To help preserve the wreck site, please try to develop your own mark that lies just a few metres outside the area of wreckage.

I know this is still a work-in-progress, but as at 16/04/21 we zoom in to a Hurricane map with a 10m scale bar. When a site is sufficiently away from land, google maps doesn't have much high resolution aerial photography available.

In this case we have to zoom out several steps to the 100m scale bar before the map gets fully rendered. I guess it is a hard problem to solve unless each site gets its own default zoom level.

Maybe a larger default value (say 100m) would avoid a newcomer being confronted with "no imagery available", yet allow other users to zoom-in further where this is possible. A wider starting view would also help put the site into context with regard to any nearby shoreline and/or other dive sites.

Keep up the good "dive sites" development work Lloyd, it is a very comprehensive thing you are building!

Update 17/4/2021: Today Lloyd updated the Hurricane sketch to his own corrected version, showing the new orientation, the new position of plinth#1, and the position of the added plinth (#2). This should help newcomers make sense of it all and the tide movements relative to the wreck. Thanks Lloyd for the prompt response.

Footnote: "Not Happy Jan!" (for those under 40 this is a cultural reference to a 1980s TV add that still lives on in the minds of my generation). While browsing the updated Hurricane dive site page I noted one of the recent changes was a new link back to a ScubaDoc webpage on diving in Melbourne's current prone areas. That page presents the idea that slack water times at sites well inside Port Phillip Heads are delayed by up to 3 hours behind the published Heads Slack time.

This is an old myth, caused by confusion between tide heights, which are delayed by some hours, and tidal streams which are delayed only by a dozen or so minutes at the inner most sites. I've been driven crazy by the persistence of this potentially dangerous idea among some divers, and a few dive shops despite it being quashed by the Port Authorities, the Sea Pilots, and any serious consideration of water flows within the Bay. There is simply no evidence whatsoever to support this idea but it still refuses to die in some circles.

Furthermore in the case of the Hurricane, the +3hrs actually puts you very close to the maximum current time rather than slack water. I have given up directly tackling the Scuba Doc staff on this issue because that got nowhere, and it became a very unpleasant confrontation on both sides. No defence of their belief was ever offered and it always came down to: "because someone I respect and trust told me its true". Such belief systems are more like a religion. Sadly I was very slow to realise that advancing multiple evidence based arguments against "the belief" is just a waste of everybody's time and will achieve nothing.

So instead I am just inserting this obscure footnote to say that if you want dive the Hurricane safely, don't add 3 hours to the Heads Slack as the link recommends. In 2017 a diver off Rye, who appeared to time his entry by doing this, wound up being rescued by the water police 10km away from his boat and quite near the Heads. His actions also clocked up about 4hrs of rescue helicopter time, which is bad PR the diving fraternity could do without!

The better advice is "don't add anything to The Heads Slack time". Due to the current strength at the wreck being around a quarter of that at the Heads, you can enter the water somewhat before the Heads Slack time and enjoy some extra bottom time. Naturally the weather can push the actual slack time around a little, but for planning purposes use the Heads Slack time without alteration.
Last edited by packo on Fri, 23 Apr 2021 11:01 am, edited 4 times in total.

Users browsing this forum: No registered users and 2 guests