Flinders Pier is the Weedy Seadragon Capital of the World!

Level: Open Water and beyond.

Along with Blairgowrie Pier, Flinders Pier would be one of the most popular shore dives in the state of Victoria with divers and snorkellers. It's famous for the resident population of Weedy Seadragons.

The Scuba Doctor hosted the BBC Natural History Film Unit while it spent three weeks at Flinders Pier in January 2016 to get footage of Weedy Seadragons for Episode 5, Green Seas, of the BBC Blue Planet II documentary series. There are dozens of Weedy Seadragons here, and during the right season, you might see the males carrying eggs around.

It's not uncommon to encounter Australian Fur Seals at Flinders Pier. They like to play with you by swimming straight at you, which is spooky in low viz. There are also large Smooth Stingrays that circle the pier. Leafy Seadragons have been spotted here by a couple of people (and photographed) but this is a very rare find.

Many species of marine life can be found under Flinders Pier, not just the Weedy Seadragons. You will often find Giant Australian Cuttlefish, large Smooth Stingrays and Southern Eagle Rays, crabs and plenty of other little fish and critters. You'll also see a Southern Fiddler Ray (aka Banjo Shark) or two. Visibility is generally quite good and can make for some excellent underwater photography opportunities.

"Into the Dragon's Lair", a short video featuring the Weedy Seadragons of Flinders Pier by Sheree Marris author of Melbourne Down Under.

The marine environment at Flinders Pier is quite a bit different to the other piers on the Mornington Peninsula. It has a grass bottom with plenty of colours, sponges, and life on the pylons too, which is a bit of a change to the sandy bottom of the Port Phillip pier dives. This is why is such a perfect home for the Weedy's and why they are everywhere here!

Diving and Snorkelling at Flinders Pier 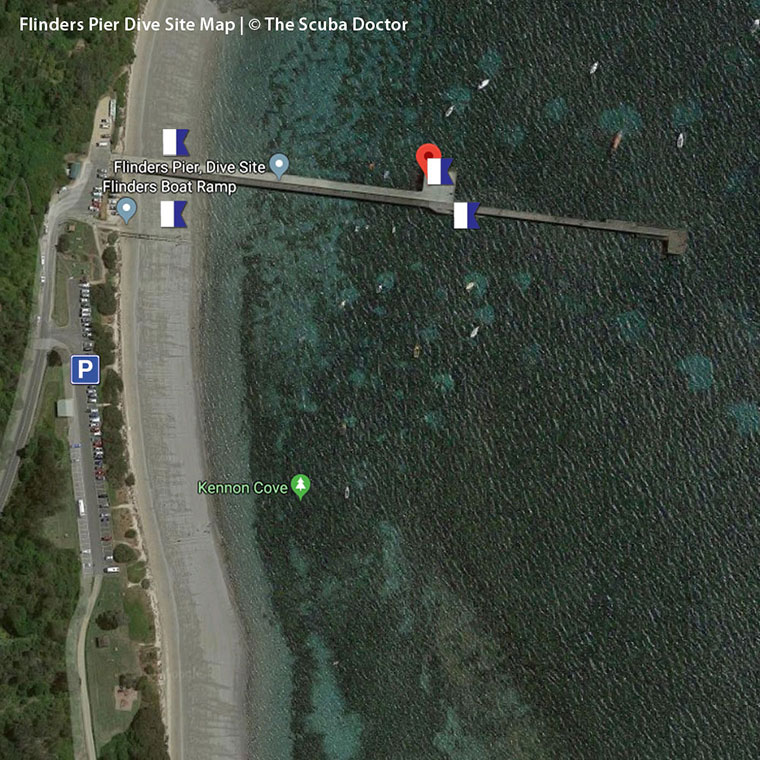 Parking: The Flinders Foreshore features a large car park just to the south of Flinders Pier. The are public toilets and picnic areas near the car park.

Safety First: As usual on pier dives there will be fishermen so make sure you have a knife handy for any snags or a tangled squid jig or two. A dive flag is also a must so others know you're there. There is often a few boats around so be careful of those and be mindful when surfacing.

Entry/Exit: It's a 330 metre long pier with many ladders and step platforms to allow for easy entry/exit points. Entry is easiest from the lower landing, which at high tide can be often covered by water. You can also come head out from the shore. Exit can be either from the shore or the same as the entry, which again at high tide is covered and makes it easy to get up. You can avoid ladders and swim right onto it and stand right up!

Ideal Conditions: Flinders Pier is the perfect alternative when Port Phillip is blown up with strong northerlies as it's protected from these winds. Best with light to moderate offshore north-westerly to south westerly winds. No good if there are strong north-easterly to south-easterly winds. If the ocean is rough, there most likely will be surges and poor viz. High tide is better for scuba diving as the tide movement is typically 1.5 metres and high tide means clearer ocean waters. Some snorkellers prefer a low tide as it puts them closer to the critters when they are on the surface. Best dived at slack water, or on an incoming Western Port tide. The viz will be best when there has been no recent rain.

See WillyWeather (Flinders Pier) as a guide for the tide times and the height of the tide.

Facilities: There are public toilet facilities at Flinders Pier and a cafe is up the road. Nearby Bass Park offers barbeques, walking trails, and a playground. However, there's no dive shop in the immediate area, so if you're planning a double dive make sure you have adequate air before you head there. The Scuba Doctor dive shop in Rye is a scenic, half-hour drive from Flinders Pier. Still close enough if you've forgotten a fin or weight belt, or want an extended interval and an air fill! 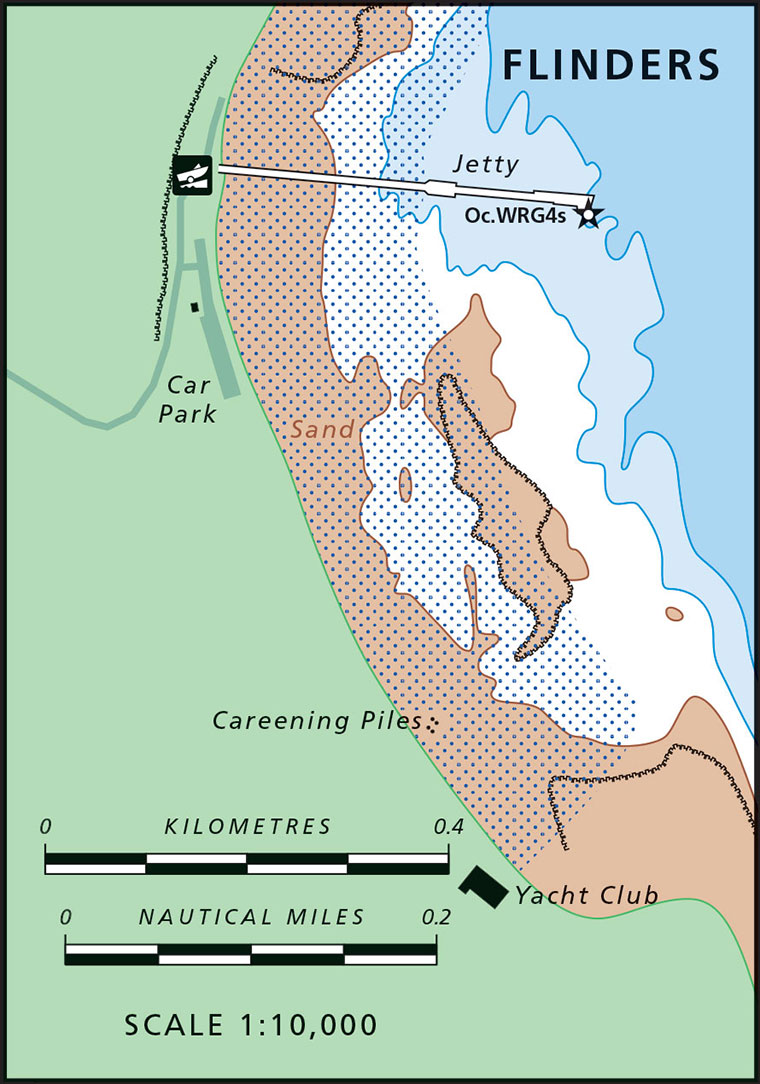 Spearfishing is illegal within 30 metres of any pier or jetty and in Marine National Parks. See Spearfishing Laws.

Traditional Owners — This dive site is in the traditional Country of the Boon Wurrung / Bunurong people of the Kulin Nation. This truly ancient Country includes parts of Port Phillip, from the Werribee River in the north-west, down to Wilson's Promontory in the south-east, including the Mornington Peninsula, French Island and Phillip Island, plus Western Port. We wish to acknowledge the Boon Wurrung as Traditional Owners. We pay respect to their Ancestors and their Elders, past, present and emerging. We acknowledge Bunjil the Creator Spirit of this beautiful land, who travels as an eagle, and Waarn, who protects the waterways and travels as a crow, and thank them for continuing to watch over this Country today and beyond.

The marks come from numerous sources including commercial operators, independent dive clubs, reference works, and active divers. Some are known to be accurate, while others may not be. Some GPS marks may even have come from maps using the AGD66 datum, and thus may need be converted to the WGS84 datum. To distinguish between the possible accuracy of the dive site marks, we've tried to give each mark a source of GPS, Google Earth, or unknown.