Explore an Underwater Cemetery of Shipwrecks in Bass Strait 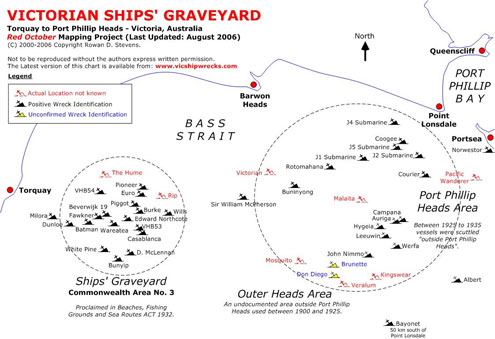 South of Melbourne there is a Ships' Graveyard. It's located 7 kilometres (4.35 miles) east of Torquay's Fisherman's Beach through to Point Lonsdale. There are 46 known wrecks to choose from. They consist of tugs, dredges, barges, lighters, coastal freighter, World War One submarines, a paddle steamer plus a patrol boat. Many of these vessels were stripped down and scuttled by an explosive charge or an opened valve cock, and many remain fairly intact to this day.

There are two areas that make up Victoria's Ships' Graveyard: 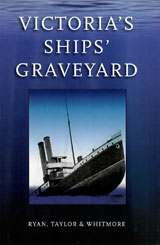 These vessels were decommissioned from the early 1900s through to 1999 and range in depth from 30 metres (98 feet) to 82 metres (269 feet). Penetration can be had on some wrecks, and there is little tidal current or shipping to be concerned with so wrecks can be dived at any time of the day. The main constraints are wind strength and the size of the swell.

All shipwrecks in the Victorian Ships' Graveyard are protected.
Any persons contravening the Heritage Act (1995) may face severe penalties as a result.

The Hume steam tug was built in 1922 in Dordrecht, Holland and bought by the Melbourne Harbor Trust in 1925.

The Kingswear in the earlier part of its career had been involved coastal trade in Queensland (not mentioned in Parsons, Australian Coastal Passenger Ships) and at some point arrived in Sydney.

The Kingswear was towed from Sydney to Melbourne by the tug Eagle in October 1906, where she was transformed into a floating pumping station. In this role the Kingswear was used in reclamation works at the West Melbourne Swamp, where silt from the old river bed was pumped into the swamp measuring 10 acres in extent. As the water pumped with the silt formed mini-lakes more solid material was required, and clay cut from the Coode Canal Banks was deposited in the river bed for pumping and filling. At the time this was described as "welcome news to bayside municipal councils and yachtsmen, who have for years been complaining that the silt deposited in the bay is eventually washed onto the foreshores" (Age 22/1/1907).

The Kingswear was described as having been in a "rotten state" with a prodigious amount of marine fouling on her hull when finally scuttled on 14 April 1915.

The brig Mosquito arrived in Melbourne from Hong Kong on 9 November 1878. It was laid up in Saltwater Creek (Maribyrnong River) before being sold to the South Australian Coal Company who converted it to a hulk in 1880.

Originally a three-masted barque the Confederate Star, renamed Palace in 1869. Arrived Melbourne 1874. Went to New Zealand in 1878. Returned to Melbourne in 1886 and made a lighter.

The Palace and the Birchgrove were owned and operated by the Port of Melbourne Authority. In February 1932 the vessels were towed out to sea by the tug Keera for disposal. The vessels were set on fire but were carried shoreward by the wind and current and ran aground near the Nobbies on Phillip Island.

Other wrecks in Victoria's Ships' Graveyard include:

Heritage Warning: Any shipwreck or shipwreck relic that is 75 years or older is protected by legislation. Other items of maritime heritage 75 years or older are also protected by legislation. Activities such as digging for bottles, coins or other artefacts that involve the disturbance of archaeological sites may be in breach of the legislation, and penalties may apply. The legislation requires the mandatory reporting to Heritage Victoria as soon as practicable of any archaeological site that is identified. See Maritime heritage. Anyone with information about looting or stolen artefacts should call Heritage Victoria on (03) 7022 6390, or send an email to heritage.victoria@delwp.vic.gov.au.

The marks come from numerous sources including commercial operators, independent dive clubs, reference works, and active divers. Some are known to be accurate, while others may not be. Some GPS marks may even have come from maps using the AGD66 datum, and thus may need be converted to the WGS84 datum. To distinguish between the possible accuracy of the dive site marks, we've tried to give each mark a source, e.g. GPS, Google Earth, or unknown.

If you don't understand the differences between the different ways coordinates are given, plus how different datum come into play, you might find the article GPS Conversions by Lloyd Borrett a useful read. It describes the problems associated with locating dive sites using a GPS receiver.

In the true spirit of making it easy to obtain, utilise and share the information for non-commercial purposes, you can now Download/view the Scuba Doctor Dive Map GPS Marks (KML file | 427.19 KB | 24-May-2022) in the Keyhole Markup Language (KML) file format used to display geographic data in an Earth browser such as Google Earth or Google Maps.

Some marine GPS units can import the information from a KML file. For others you can use use a file translate program (e.g. GPSBabel) to convert the KML file into an import file format (e.g. GPX) supported by your GPS unit.

If you have have information about other dive sites you'd be happy to see added to the information available here, or any corrections and/or updates to the diving site GPS marks listed here, please feel free to Contact Us. See also, Dive Site Help.

Copyright in photographs and other materials used here remains with their artists and authors. We are happy to acknowledge appropriate copyrights should they be made known to us.

Bass Strait Warning: Always keep an eye on sea conditions throughout any shore or boat dive in Bass Strait on Victoria's coastline. Please read the warnings on the web page Diving in Bass Strait before diving or snorkelling this site.