Tales From The Deep

Peter Fear is quoted in The Age on the channel deepening

So what's at the bottom of Port Phillip? Natural treasures, say divers and marine biologists. The State Government yesterday announced another study into the environmental impact of deepening the bay's shipping channels.

Diver Peter Fear knows what secrets lie beneath the waters of Port Phillip's treacherous entrance. He jokes of finding skulls and bones. But what he has really found in 20 years of exploring the shipping channel at the bay's heads, is, he says, "dumbfounding beauty".

"It's spectacular diving," says the 58-year-old Fear, who lives in Rye and repairs dive equipment in Portsea. "It is world-class. But it is a mysterious place, a place that has to be dived with respect. You have to know what you are doing."

Such is its danger - with giant ships steaming past, powerful currents and tides that test even the most ancient of mariners - few people know what is in the shipping channel.

But many of the divers and marine biologists who do know are sounding the alarm bells over the $545 million plan to allow bigger ships through the heads and up the bay to Australia's busiest container port, the Port of Melbourne.

But yesterday it was revealed that others share these concerns, too. The State Government released the findings of the independent panel charged with assessing the environmental impacts of the deepening project. The panel found - and the Government agrees - that some serious doubts remain about plans to remove rock in the rip.

These concerns were among three major issues the Government yesterday ordered the Port of Melbourne to investigate in a supplementary environmental effects statement - a study likely to delay the project for another year. The other two issues were the contaminated sediments at the Yarra's mouth and how dredging will impact on the bay's ability to avoid algal blooms.

The panel recommended that the Port of Melbourne prove that the technology it wants to employ at the heads is viable. It is also concerned about impacts on marine protected areas - the port must prove how the project will leave the parks untouched. The panel has also asked the port to do tests on how it will prevent rocks from falling into the deep kelp forests and biodiversity-rich canyon.

Thousands of years ago, before the sea level rose, the Yarra meandered through the grassy plains of what is now Port Phillip. At the heads, between Point Lonsdale, to the west, and Point Nepean, to the east, the Yarra formed steep canyons, 98 metres in the deepest part, and made a turn, creating a plateau that juts towards the surface like an underwater island. It is this plateau, along with parts of the channel in the southern and northern parts of the bay, that makes it too shallow to allow bigger ships to pass.

If the deepening project is approved, the dredging in the north and south of the bay will be mostly sand and silt, creating turbid plumes of cloudy water. But the dredging in the heads is entirely different: it is an incredibly difficult operation that requires the dredger - a ship called the Queen of the Netherlands - to scour three metres of rock from the top of the plateau. 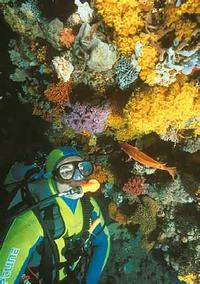 Under the sea: A dive's delight typical of the seabed near the heads.

Counter to his name, Fear is a little more game than your average diver. Most scuba diving in Victoria takes place at Port Phillip heads, but almost all is in the marine national park, a few hundred metres away from the domain of the giant ships and where the Queen will be doing her work. The Port Phillip Heads Marine National Park is the jewel of Victoria's world-leading underwater park system. Along the walls of the old Yarra canyon is aquatic life that some say surpasses the Great Barrier Reef: an octopus' garden of sponges and corals, bright yellow carpets of anemones and divers' delights such as the blue devil-fish and finely branched sea fan corals that stand like tiny trees in yellow, orange or deep red.

The same natural wonders that exist in the marine park live in the shipping channel, but it is dangerous and so fewer divers venture there. Those who do must check with the Point Lonsdale lighthouse to avoid ships and descend during a tight window of slack water.

The biggest environmental concern about dredging at the rip, highlighted by the port's own experts, is rocks falling from the plateau onto this deeper, fragile ecosystem.

"They are actually going to destroy an environment that is equally as good, if not better, than the top of the Lonsdale Wall, which is a marine park," says Fear.

The port authority's marine biologist consultant, Dr Matt Edmunds, found there was an extreme risk of rocks falling. Some sponges, he said, could take weeks to recover, others decades.

Some parts of the plateau, however, have a ledge where rock will settle instead of falling into the depths. But other areas have a sheer drop into the underwater gorge. Edmunds also found there were high risks of fish and squid at the heads changing behaviour due to the dredging noise.

Marine conservationist Tim Allen, who has dived the heads often and who was central to the campaign to set up Victoria's marine parks, said it was a shame this underwater world at the heads remained a mystery to most Victorians. "If people knew what was at stake they'd be demanding the utmost care," he says. "Once you've dived there, once you have experienced the walls of coloured sponges, explored the kelp forests, and seen the beauty of the marine life it holds, you soon realise that it is a very special part of Victoria and a special part of Australia."

Others disagree, saying the issue at the heads is not as important as other environmental concerns.

Jeanette Wilson, a marine environmental consultant who has been diving the area for 40 years, says a few rocks won't hurt. "There's an awful lot of rocks that have been tumbling down there for centuries," she says. "The removal of rock at the heads has been going on for 80 years in the rip, the first time was in 1912."

She takes a pragmatic view and stands apart from her marine biologist colleagues. "I'd prefer to see the deepening go ahead in an environmentally sensitive way than do nothing. If a tanker went aground at the heads it would be a disaster."

But what lives on the underwater plateau? This seems a simple question: no great controversy, state secret or scandal. But this elementary inquiry quickly turned into a mystery of the deep. The Port of Melbourne Corporation would surely know what they were about to dredge. But even if they did, the port authority was simply not keen to discuss the topic or supply pictures.

The Age was not given access to certain photos because they were deemed too "emotive".

"It is just rock," said Damien O'Brien, the port's channel-deepening project director. "There is not much biodiversity around the plateau."

The real answer is deep in the environmental effects statement, which has 50 chapters and an estimated 6000-7000 pages.

Edmunds - who the port authority refuses to make available to The Age to be interviewed - explains in his report that the plateau environment is, indeed, of low biodiversity because the extreme currents and swells make it difficult for things to live there. But it is not just rock. Underwater video sled surveys show that a kelp forest lives there. Common kelp, or ecklonia radiata, manages to cling to the plateau, but due to the currents it grows shorter than most other kelp forests. Fish and a few other things in shells live there, too. Divers, such as Fear and others, report there are soft corals and huge crayfish up to 70 centimetres long.

Edmunds says in his report that "it is expected no biota would remain in the deepened areas". What this means, in everyday parlance, is "total wipe-out". He does, however, expect the ecosystem to come back in six or seven years. This, he admits, is very difficult to predict as it depends on the surface the dredger leaves behind. Too smooth and nothing will grow back, but loose rocks will move around and destroy recolonising organisms.

The Port of Melbourne says it understands how delicate the dredging is at the heads. Indeed, early on it ruled out using explosives to remove the rock.

So how do they plan to pull off the deepening of the heads in one of Australia's most unforgiving pieces of water with minimal environmental impact? Central to the dredging operation is the 173-metre Queen of the Netherlands, now working in Dubai. The ship will become a fixture in the bay for two years, once the channel deepening starts.

The Queen will be big enough to stay in the heads and not get knocked around by its turbulent currents, tides and swells. Owned by the Dutch company Royal Boskalis, the ship is a trailing suction hopper dredger. What this means is that on either side of the ship, long arms drop down to the bay's floor (although only one arm is usually operating at a time).

The arm is controlled by hydraulics, so even when the ship is moving around, it remains on the bay floor. The hydraulics also mean that the arm won't get stuck on anything.

The arm has a drag head on it that shaves rock. The shavings then get sucked into the hold of the ship. Thousands of litres of water are also sucked up and then pumped out of the hold. When the dredger is in other parts of the bay picking up not rock, but mostly sand, turbid, milky plumes are created. The dredger then dumps its load in designated dump sites on the bay's floor (outside the shipping channel, of course).

If the drag head attached to the Queen's arm does not totally remove the rock at the heads, another smaller vessel called the Cetus will help. It has a specially designed hydrohammer.

The hammer is a sophisticated drill that is also hydraulically controlled. So even if the vessel is moving around in the heads, the hydrohammer will stay where it is. The hammer then cracks and breaks up the rock and the Queen then comes and picks it up. If the Queen cannot pick up the rock, the 78-metre Cetus has a "stone fisher" that does the job. The port authority's Damien O'Brien says these precautions and high-tech dredging equipment will mean fewer rock falls into the biodiversity-rich canyons at the heads.

The independent panel, in the findings released yesterday, was so concerned at the impact of dredging it recommended that an early test dredge be undertaken at or near the heads. This will be some consolation to campaigners such as Tim Allen. "To some of these guys at the Port of Melbourne, it's just a shipping lane," he says, "but it means a lot more to divers, fishermen and people who know and love the area."