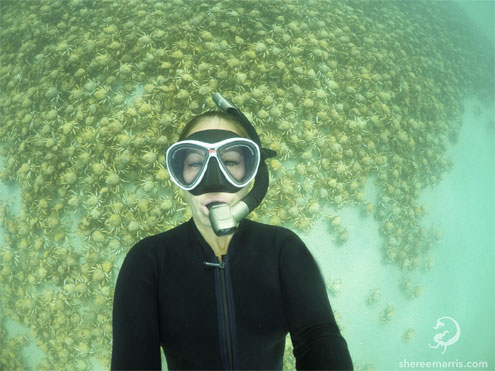 For the 2021 moulting season the Giant Spider Crabs showed up, but they didn't come into the shallows and thus weren't seen in the usual huge aggregation numbers at Rye or Blairgowrie Piers. Instead of coming into the shallows of Port Phillip they stayed out in 8+ metre deep waters.

It would seem the moon phase has nothing to do with it. The Giant Spider Crabs were seen moulting out deep many weeks before the Full Strawberry Moon of Thursday 24 June 2021.

Every year around late May through to mid June one of the world's most interesting congregations of marine life happens as Giant Spider Crabs come together in the shallow waters off of the piers and beaches of Port Phillip. The huge casts of Giant Spider Crabs (Leptomithrax gaimardii) are often sighted as they gather en masse on the sandy bottom of Port Phillip, near Blairgowrie Pier and Rye Pier on the Mornington Peninsula.

Video by The Nature of Science.

When the Giant Spider Crabs aggregate and march, this hungry army is easy to spot. They scavenge whatever food they can find, including the wildlife on the shells of one another. The spectacle of hundreds of thousands of large orange crabs against the bare, sandy sea floor is an amazing sight.

While scuba divers can stay longer on the bottom and get closer to the Giant Spider Crabs, you don't have to be a scuba diver to see them. You can be a freediver or snorkeller using just a mask, snorkel and fins, though as the water is somewhat cooler than you'd be used to in summer, you might want to have a wetsuit on as well. You can even see them from the surface by grabbing a pair of swimming goggles. When the Giant Spider Crabs carpet the seabed around and under the local piers, they are so readily accessible that even those walking on the pier or beach nearby can appreciate this special event.

If you don't have snorkelling or scuba gear, please visit our dive shop in Rye to buy the equipment you need. If you're a certified scuba diver you can hire scuba gear from us.

It's still a bit of a mystery as to what the aggregations are all about. We know that during the major gathering, which starts in late May and kicks off big time in early June, the Giant Spider Crabs moult. But there may be other things they get up to as well.

All hard shelled marine crustaceans like the Giant Spider Crabs have to moult periodically. They outgrow their protective suit of armour, and then go through a process of shedding it so that they can grow bigger before their new skin hardens. The process of moulting can take up to an hour and all the crabs in an aggregation moult almost simultaneously.

Once they're out of their old hard shell Giant Spider Crabs are vulnerable to lots of different predators like seals and rays, dolphins and birds. While their new shell hardens, most species of crabs hide in a rocky crevice or similar suitable sheltering place. However, the shallows of Port Phillip are mostly a large expanse of sandy bottom with no place to hide.

Our Giant Spider Crabs obviously choose a different 'safety in numbers' approach. Their gatherings often contain many thousands of individual Giant Spider Crabs, which in some places are heaped metres in height and almost out of the water in the shallows. They cover vast areas of the seabed in a mind blowing Giant Spider Crab carpet.

The gatherings can be thought of as an enormous schoolies party as most of the congregating Giant Spider Crabs are undergoing their puberty moult which brings them into adulthood and sexual maturity. The females of many crab species are only sexually receptive when soft shelled just after mating. Thus it's tempting to think that a lot of mating activity goes on in the aggregations. However, this may not be the case with our Giant Spider Crabs. It's rare to observe them mating after moulting, thus they probably mate at other times once they've moved back into deeper waters.

When the Giant Spider Crabs Gather to Moult

Huge mass gatherings usually start to be seen around late May each year. At some point thereafter, typically in the first week or so of June, something triggers the majority of the Giat Spider Crabs to start their moulting process. It's usually all over by mid June. In late June through early July the Giant Spider Crabs move off into deeper waters. The water temperature during this period is 11 °C (52 °F) to 15 °C (59 °F).

The Giant Spider Crab moulting process is probably determined by some biological cues, plus some environmental cues as well. Some people think it has something to do with the first full moon in June. However, what they are is yet to be determined.

While the gatherings of hundreds of thousands of Giant Spider Crabs is a spectacular thing to witness, there are plenty of more specific things to look out for.

The Moulting Process — Taking the time underwater to stop and watch a Giant Spider Crab go through the full moulting process is amazing. Most seem to start the process near the first full moon in June.

Feeding Frenzy — When there are Giant Spider Crabs gathered en-masse in a location after moulting, it is natural that their predators will show up. Seals and rays, dolphins and birds are commonly seen feeding on the Giant Spider Crabs. This sudden influx of tender crab meat is probably an important part of the Port Phillip food chain.

Stingrays feeding on Spider Crabs in the shallows adjacent to Rye Pier. Video by Brett Illingworth.

Crab Redecoration — Giant Spider Crabs attach camouflaging material to their carapace to avoid being easily seen by predators. Plus algae, sponges and sea squirts set up shop on their shells helping to provide excellent camouflage. Many divers have been shocked to see what they thought was a stationery piece of seabed rise up and wander off! After moulting, all the camouflaging has to be redone on the new armour so there is plenty of this activity on show.

During the season from May through June when large casts of Giant Spider Crab are forming and then moulting we offer Morning 9am, Afternoon 1pm and Night 6pm Guided Dives to see this amazing sight! Be quick as their movements are unpredictable and these spots always fill fast. The gathering is usually over by the end of June.

Essential Info When Wanting to See
the Giant Spider Crabs: 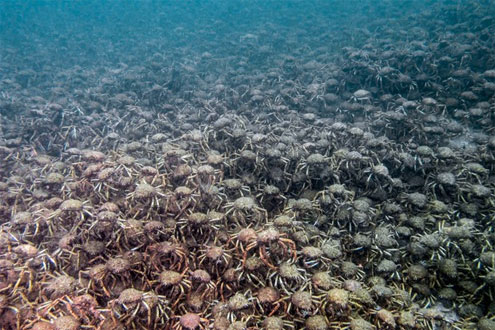 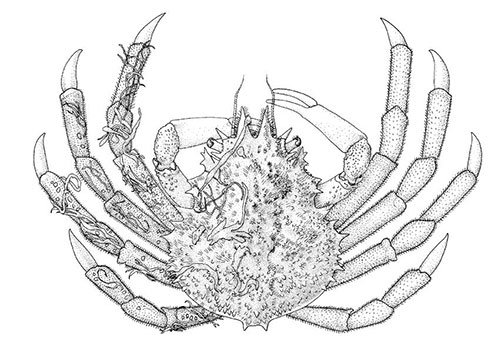 Water column: — On or near the sea floor

Harmful: — Not harmful but a nip from large claws could be painful

Parks Victoria are responsible for Port Philip waters and have information about the Spider Crabs in Port Phillip Bay (sic).

We often get asked, "Can I catch and eat the Giant Spider Crabs?" The answer is that currently you can legally catch 15 a day, with a Victorian fishing licence. See here for more details. But why would you want to? Most people consider the meat to be foul tasting and thus inedible.

Many thanks to PT Hirschfield (Pink Tank Scuba), Sheree Marris, Brett Illingworth and others for the information you see on this page.