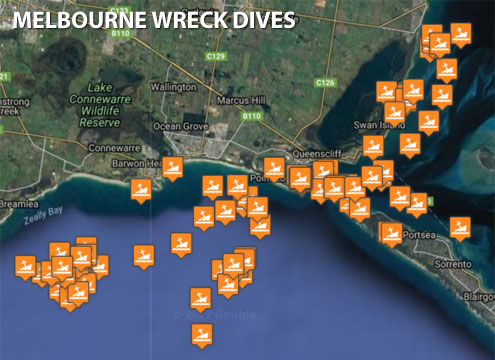 Does wreck diving stir your sense of adventure?

Melbourne, Victoria, Australia has a rich maritime history. This has resulted in more than 800 ships coming to grief in Victoria waters with only about 30% of them having been found. Plus, there is an extensive Victorian Ships' Graveyard of scuttled shipwrecks south of Melbourne in Bass Strait, not far from the entrance to Port Phillip and the Port of Melbourne.

Because there are so many of them, we've divided the shipwreck dives into the following sections, each with their own web page:

With so many shipwrecks that haven't been found in Victorian waters, it's only natural that divers would go looking for them. One of the most organised and successful groups is Southern Ocean Exploration.

Southern Ocean Exploration (SOE) is a non-profit group of explorers, educators and sub-professional maritime archaeologists who locate and record what lies undiscovered in the expansive coastal waters of Southern and South Eastern Australia.

Heritage Warning: Any shipwreck or shipwreck relic that is 75 years or older is protected by legislation. Other items of maritime heritage 75 years or older are also protected by legislation. Activities such as digging for bottles, coins or other artefacts that involve the disturbance of archaeological sites may be in breach of the legislation, and penalties may apply. The legislation requires the mandatory reporting to Heritage Victoria as soon as practicable of any archaeological site that is identified. See Maritime heritage. Anyone with information about looting or stolen artefacts should call Heritage Victoria on (03) 7022 6390, or send an email to heritage.victoria@delwp.vic.gov.au.