Make sure you have the best dive reel for the job 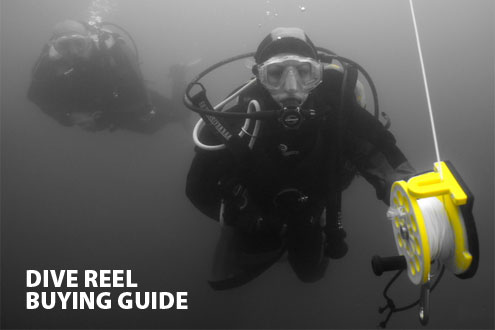 Reels are essential tools for divers. They can be used to keep you in contact with surface support, guide you back to a known starting point, or to position you during search and retrieve operations. A common mistake is trying to use one type for all diving applications. This can lead to complications and potentially to danger. There is no point using a reel containing hundreds of metres of line to deploy a delayed surface marker buoy (DSMB) from a depth of five metres. Equally, trying to use a finger spool to reel out through a wreck or cave penetration might lead to entanglement.

Here we identify four main categories of reels and highlight ideal examples for each specific application. Naturally there can be crossover from one category to another, but eventually you'll probably want several different reels for different dive situations.

Probably the most common application for a reel used by recreational divers is for the deployment of a Delayed Surface Marker Buoy (DSMB). For this task, it must be relatively easy to release the line to freewheel and there must be little chance of it snagging.

Caution: Never have the reel physically attached to you while deployment takes place. Should any snagging or jam occur you want to be able to easily jettison the reel, line and buoy.

Also see, How to Deploy a SMB.

Winding Knobs
When selecting which reel to use, take your other gear into consideration. If you wear thick gloves while diving, a finger spool might not be a very effective design for you. Cold water divers frequently prefer reels that have winding knobs, which allow them to wind the spool more easily.

Tension Control
Some reels offer tension control, which is typically controlled by a spring. Tension control keeps your line on your reel from free-spooling, or uncontrollably unwinding off of the spool. A strong argument for using a reel with tension is it allows you to control the rate at which a lift bag moves to the surface.

Finger spools are ideal for shallow deployment of a DSMB, or as jump spools, to connect a diver from one already laid line in a cave system to another ensuring that at all times you are in contact with a line leading you back out of the cave. Spools require a certain amount of dexterity and caution is needed when wearing thick gloves. They also take time and practice in order to become proficient in their use.

There can be some crossover in the use of reels, however wreck reels tend to hold between 50 and 100 metres of line, and different colours can be useful. Colour can indicate a specific route or a particular pair of divers.

Wreck reels need to be tough, and are often made from either hardened resin or metal.

Whether you choose floating or sinking line is a matter of debate, but the most important thing is not to get it tangled. Frequent belays, looping around pieces of wreck, are essential but don't tie a knot and avoid sharp edges that can cut your line.

Unlike when using a reel to deploy a DSMB, for any penetration it is vital that you are connected to the reel or line.

The largest capacity reels are the ones used for cave diving and they can hold as much as 1000 metres of line, although 100 to 200 metres is a more manageable amount. Ideally the line needs to be light in colour — white is the favourite — and made of either 24 or 36 gauge negatively buoyant braid.

As with wreck exploration, it is absolutely paramount that the start of the line is securely fixed to the entrance/exit point. At convenient intervals it is good practice to loop the line around prominent features to keep the line taught and also to mark the direction of the way out with line arrows.

For survey work, small knots can be tied in the line at say three metre intervals so that distances between know points can be measured.

Once again, the diver should be connected to the reel or line and bolt snaps are preferred. Avoid carabiners (suicide clips) as these can attach themselves to lines unintentionally under pressure.

If you use reels for your diving activities then spare reel line is one handy item to have on hand. Nylon braided line is used because it's sturdy and it doesn't float. This is the type of line used on top quality reels and spools and thus makes great replacement reel and spool line. These are three line sizes recommended by GUE and DIR...

#18 (or 18 gauge) is the lightest line and commonly used for distance lines.

#24 (or 24 gauge) is the middle weight and most widely used line. It's commonly used in cave diving applications, plus for gear ties, and open water reels and spools.

#36 (or 36 gauge) is the heavier line and is more popular for wreck diving. It's the line of choice among experienced wreck penetration divers.

These reel line sizes are highly recommended for use on primary reels, safety reels, jump/gap reels, and finger spools. Overloaded reels and spools are common and too much line can cause jams during initial deployment. If you are having a problem with jams, check the length of the line and try removing some excess if your reel or finger spool has been overloaded.

Line can sometimes be difficult to see underwater, especially if it has been left in situ for some time in silty conditions. When diving in either wrecks or caves it is paramount that you know which way is out.

Line arrows enable you to mark specific directions of travel. Line cookies help you identify your markers and route or mark a point of interest on the route. Finally, don't forget that when working with any kind of lines underwater, a good sharp knife or purpose built line cutter is essential. See Line Arrows and Cookie Markers.

Jon Line
Buy yourself a little breathing room. Use a Jon line during your decompressions stops to tether yourself to the anchor line and then float a slight distance from the line to keep you from bumping into other decompressing divers.