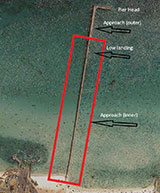 Rye Pier Approach Reconstruction — Rye Per is closed starting 14 February 2022, until Winter/Spring 2022, subject to weather and timber availability. To ensure public safety, a complete pier closure is in place while the first 270 metres of the pier is rebuilt featuring a wider and renewed timber deck, safety railings on both sides and new public lighting.

To ensure visitor safety, a legal set-aside has been established around the works area meaning entry onto or under the works area of the pier is prohibited except for Parks Victoria officers and individuals involved in the works. This work area will be marked and include the first 270 metres of the pier.

Swimming, diving or snorkelling under the first 270 metre section of pier undergoing works will be prohibited for public safety and an exclusion zone established. Diving under the pier head (the far end of the pier) may continue provided access is from the shore or from a vessel away from the pier head, and care is taken whilst transiting around the works site exclusion zone. Divers must ensure they have a class A dive flag visible and ensure they do not enter the works area. Access onto the pier head and low landing will be suspended during the closure.

Rye Pier is the Easiest Place to See Seahorses in the World!
Scuba Dive or Take the Octopuses Garden Snorkelling Trail

Level: Open Water and beyond.

Rye Pier offers beautiful underwater vistas for divers and snorkellers about a 100-minute drive south from the Melbourne CBD. Rye is on the Mornington Peninsula that separates Port Phillip by just 4 kilometres from the surf back beaches in Bass Strait. Rye Pier features a divers' entry lower platform for easy access on a day or night dive to see seahorses, bottom feeding stingrays, spider crabs, octopus, squid and nudibranch, through to a wide range of fish species.

Rye Pier lies on the southern shore of Port Philip between Blairgowrie (to the west) and Rosebud (to the east). Rye Pier faces north-north-east into Port Phillip and has a depth of 3 metres at its head shelving to 0.5 metres half way down its length. Diving at high tide with calm waters offers the best scenery. Underwater it's predominantly sandy around the pier, with small patches of seagrass and once out from the pier it's pure sand bed. There are three shipwrecks and Elsas Reef to explore nearby.

What To Expect:
Rye Pier is an excellent day and night dive site with a maximum depth of around 6 metres. This is the place to go if you want to look at Seahorses.

Rye Pier is an L-shaped pier approximately 500 metres long. It was built in about 1860 to service the lime trade. Points north-north-east so not diveable in strong northerly winds. A long walk to the lower landing located 50 metres from the end of the pier. Much better at night as more things come out then. 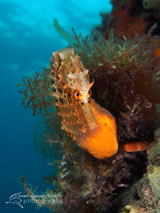 The pylons are encrusted with marine growth so make sure to stop and have a good look around these. Also, take your time to have a look inside the tyres, as there are usually plenty of small critters hiding in there, often including some cleaner shrimp willing to give you a manicure. There are parts of Rye Pier that must be nurseries as during certain times there are many baby critters here.

Rye Pier is full of life and different every dive. It's the easiest place to view Seahorses in the world with both the Bigbelly Seahorse (aka Pot Belly Seahorse) and Shorthead Seahorse species in residence.

You will see large Smooth Stingrays fairly often and you can see crowds gather on the pier to watch them swim around. There is usually heaps of people fishing, so stay under the pier where the interesting marine life is.

Rye Pier is also known for Giant Spider Crabs. Each year from late May through mid-June thousands of Giant Spider Crabs migrate along the ocean floor to shallow waters. When the water temperature drops, things heat up as the giant spider crabs moult their shells. As they crowd together for protection from predators like stingrays, seals and sharks, they sometimes begin to pile up in stacks over a metre high.

Watch out for fishing lines and carry a dive knife, or a dedicated line cutter, just in case. It's advised to stay under the pier between the pylons to avoid the fishing lines.

Some people like to head out 200 to 400 metres from under Rye Pier to grab a feed of Scallops. You can't collect scallops in waters less than 2 metres deep (the intertidal zone) in Port Phillip, and generally, the scallops are out in water 10 to 20 metres deep.

Divers have the opportunity to catch a feed of Scallops (Pecten fumatus) at this dive site. Remember your catch bag and current Victorian Recreational Fishing Licence. Please abide by all current fishing regulations, such as the bag limit of 100 scallops each, if you intend to catch scallops. See melbourne-scallop-dives for a list of other scallop dive sites near Melbourne.

Safety Tip: We recommend you read our boat-diving-safety and dive-float-and-flag pages and use the described Cray/Drift Buoy Line Diver Freedom System when drift diving from a private boat for scallops.

There is a 200-metre-long snorkelling trail of underwater photographs known as the Octopuses Garden Marine Trail attached to the pier pylons, explaining the various marine life present. It is a self-guided trail where you can expect to see schooling fish, pylons saturated with colour and life, seahorses, crabs, rays and even the odd penguin.

Signs mounted on the pylons indicate special features of the area and the marine animals to look out for. Seven underwater signs on the left-hand side take you out, while seven on the right-hand side bring you back to the shore.

Some of the underwater signs are now missing or very faded. However, it still makes for a great snorkelling adventure. Depending on the tide the depth varies from half a metre to three metres on the trail.

There is also Elsa's Reef, a small artificial reef about 60 metres north from the end of Rye Pier in 6 to 7 metres of water. There is a sign and pickets leading to Elsa's Reef from the middle of the arm of the pier at the end that runs east. There is usually a large octopus hiding in the box and juvenile fish around. Nice for something different! Be careful when venturing from the pier as boats and jet skis are quite often above. Make sure you take a dive flag or SMB with you if you head that way. 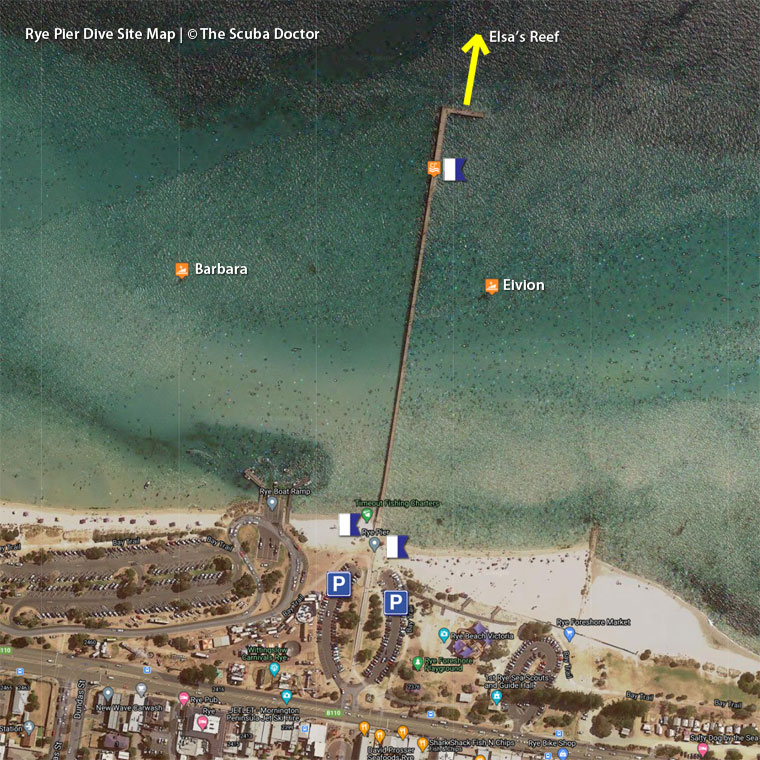 Ideal Conditions:
Southerly winds and high tide. Not diveable in strong northerly winds. Though the high tide is ideal, you are able to dive Rye Pier on any tide.

See WillyWeather (Rye Pier) as a guide for the tide times and the height of the tide.

Entry/Exit: Entry can either be from the lower landing near the end of Rye Pier or straight off the beach. Straight off the beach means crossing a large sandbank. When entering or exiting via the beach it's better to use the east side of the pier where there is a pathway with handrails to help you make your way between the beach and the car park.

Be sure to take out a dive flag if you're planning to venture out from under the pier as there is often boat traffic. Over the summer holidays be very careful of PWC's (jet skis) as they come in very close to the pier and very quickly (despite rules and regulations). Boats often come in and out to the lower landing. Be careful when entering and surfacing!

Parking: Lots of foods options here, plus a toilet block, and in winter plenty of car parks.

Other: Public berthing is available at Rye Pier for a maximum of 48 hours (vessels to be attended at all times), Other restrictions are detailed on Parks Victoria signage.

The popular Rye Boat Ramp is nearby. The Rye Beach area is a terrific playground for children and calm waters and wide beaches make it great for families to enjoy. Opposite Rye Pier is Rye shopping strip with many eateries, the Rye Hotel and boutique shops.

Rye Pier is also close to The Scuba Doctor Dive Shop. So please drop in and catch up with us for air fills before and/or after your dive. 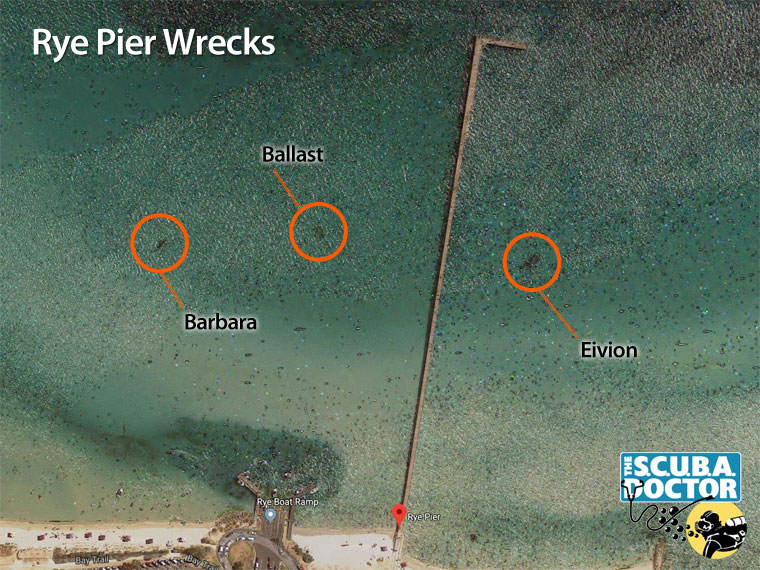 Eivion: The wreck of the Eivion lies to the east of Rye Pier, in about 2 metres of water. It can be spotted from up on the pier (about halfway) as a dark patch. It is often home to many nudibranchs and rays. You can find shrimp and a variety of small fish. Something nice to change things up or to head to on a second dive.

There are also two dark patches on the eastern side of Rye Pier clearly visible on Google Earth. Both sites lie on a clear sandy seabed with a maximum depth of 3 metres. Both sites are accessible via the shore or the pier as well as by boat. Both sites are heavily overgrown with weed, making it difficult to distinguish features.

Barbara: The second patch, further to the west, is the shipwreck remains of the wooden schooner Barbara. The remains consist of some frames and planking and a small pile of green rounded ballast stones. From the size and shape of the frames.

Caution: Care needs to be taken if you plan to visit the sites of these shipwrecks, especially those west of Rye Pier, offshore from the Rye Boat Ramp. These are high traffic boating areas. For your own safety, you must use a surface dive float and dive flag.

The sand in this part of Port Phillip is highly mobile and there may be more of the wreck underneath the seabed.

Historical accounts of shipwrecks at Rye inform us that four wrecks have occurred in the vicinity of Rye Pier.

Spearfishing is illegal within 30 metres of any pier or jetty and in Marine National Parks. See Spearfishing Laws.

Traditional Owners — This dive site is in the traditional Country of the Boon Wurrung / Bunurong people of the Kulin Nation. This truly ancient Country includes parts of Port Phillip, from the Werribee River in the north-west, down to Wilson's Promontory in the south-east, including the Mornington Peninsula, French Island and Phillip Island, plus Western Port. We wish to acknowledge the Boon Wurrung as Traditional Owners. We pay respect to their Ancestors and their Elders, past, present and emerging. We acknowledge Bunjil the Creator Spirit of this beautiful land, who travels as an eagle, and Waarn, who protects the waterways and travels as a crow, and thank them for continuing to watch over this Country today and beyond.

The marks come from numerous sources including commercial operators, independent dive clubs, reference works, and active divers. Some are known to be accurate, while others may not be. Some GPS marks may even have come from maps using the AGD66 datum, and thus may need be converted to the WGS84 datum. To distinguish between the possible accuracy of the dive site marks, we've tried to give each mark a source of GPS, Google Earth, or unknown.